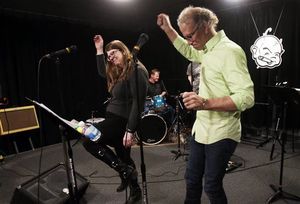 A Minnesota band camp is giving baby boomers and younger musicians a chance to prove they are never too old to rock and roll.

Since 2009, Rock Camp for Dads has allowed hundreds of dads – and moms – to unleash their inner Jimi Hendrix without the hassle and costs of organizing a band.

Tom Hammersten, 52, an insurance company underwriter, recently sang lead vocals in a live performance at Rock Camp. The married father of three also has performed in an Allman Brothers tribute band, an ’80s music group and a British punk rock band at camp.

Rock Camp offers 10 courses a month. All amps, drum kits and microphones are provided – all campers have to bring is their guitar, bass, drumsticks and desire.

Campers range in age from late 30s to early 60s (since the camp serves alcohol, campers must be at least 21 years old) and are divided into three levels – Rock 101 for beginners up to Rock 301 for advanced musicians. After four weeks of rehearsing with their new bandmates, campers hit the stage for a real gig.

Mark and Kathleen Stoehr recently fronted a Fleetwood Mac band at Rock Camp. The married couple met 30 years ago during a community theater production of “Hair.”

“You can see somebody who comes in here and you think, `Looks like somebody’s grandpa,'” said Mark Stoehr, 55.