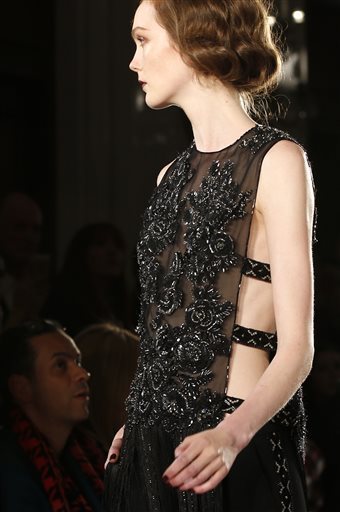 The Associated Press is all over New York Fashion Week, from its runway fashions to celebrity-packed events. Here’s what some AP writers are seeing:

JEREMY SCOTT TAKES US BACK TO THE NURSERY

It’s too bad that Kanye West didn’t bring young daughter North when he checked out Jeremy Scott’s fashion show on Wednesday. The nursery motif – dolls, hippos, little lambs, teddy bears – would have made the toddler feel right at home.

Scott’s shows are never less than whimsical and entertaining, and this one held true to form. Models sauntered down the runway in babydoll mini-dresses and tights in pastel colors like baby blue and yellow and bright pink. They wore sweet baby bonnets or long stocking caps.

Their hair was covered with paint splotches. A few dresses were actually made of canvas and then painted on.

Truth is, this was pretty demure for Scott, who’s been known in previous collections to have a man covered entirely in fur like Chewbacca, or little gold machine guns hanging from a bustier.

“I was really inspired by the idea of dolls,” Scott said in a backstage interview, “and how when you loved them so much you cut their hair and you painted on them.”

“So I wanted to kind of capture that loved toy, the loved doll kind of feeling. There’s lots of prints – definitely inspired by nursery rhymes like `Humpty Dumpty’ or `Mary Had a Little Lamb.'”

Scott doesn’t waste too much time thinking about how people will be evaluating his clothes.

“I just want people to have a good time,” he said. “It’s cold outside but warm in here.”

The ladies on the runway of Michael Kors don’t do lunch. They do business – in fur, Oxfords and sumptuous sweaters and suits cinched at the waist with skinny belts.

Kors, in a backstage interview before Wednesday’s show, described his fall collection as “opulent restraint.”

In the colors of barley, a young fawn, charcoal and slate, Kors had icons on his mind and their yin-yang balance from head to their fur muffs to their shoes.

“You think about the Duchess of Windsor, who certainly was very glamorous and very elegant, but she was very understated, kind of always grabbing from the duke’s closet, too. And when you think about the `30s, one of my favorite movies is “Chinatown,” and Faye Dunaway in her riding clothes,” he said.

That balance, Kors said, is deeply rooted in American style, stretching through the decades to Babe Paley in the `60s and Carolyn Bessette-Kennedy, “looking really chic but being able to jump on a bicycle.”

And after, Kors is ready with sparkly pajama-wear and capes in silver fox.

Michelle Obama picked a Michael Kors suit for the State of the Union. It was a thrill for Kors, who also marvels at the women on the street who tote his bags and wear his watches.

Kors, who heads a global fashion and style empire, said “commercial” is far from a dirty word.

“For her (the first lady) to choose to wear something of ours on a really important night, it’s very kind of gratifying in the same way it is when I see someone walking through the airport and they’ve spent their hard-earned money,” he said.

Kate Hudson, a friend, was on hand, looking springy in yellow on yet another cold winter’s day.

In smoky gray tulle, long black fringe and strands of silver beading against white, the Marchesa designers Georgina Chapman and Keren Craig brought on an opium dream that might just waft its way onto a red carpet very, very soon.

The duo Wednesday staged their fall show in two small rooms at the baroque St. Regis hotel, a perfect old New York backdrop for a Gatsby-inspired look in silk, Chantilly lace and poppy flower details, the latter an ode to the mother source of their drug of choice.

Chapman added of their models’ softly waved hair, smudgy eye makeup and dark lips: “We were seeing a little bit Fitzgerald. … The hair wants to feel like they’ve been partying Gatsby all night.”

Soon Chapman herself, married to film producer Harvey Weinstein, will be doing her own partying. She said she just picked out her Oscars outfit and will have one eye on the TV to watch for Marchesa gowns on the red carpet as she’s dressing for the awards show Sunday.

“It’s nerve-racking,” she said of red carpet season. “We’ll never, never say someone’s in our dress until we see a picture of them, because you don’t know.”

Chapman went with black and gold and floral from this collection for her Oscars look, and she’ll be wearing custom Marchesa from the brand’s first jewelry line.

For now, the two were happy in their fashion week haze of crystal embroidery, ostrich feather fringe and a few plunging necklines fit to party the night away.

Blake Lively and Weinstein were on hand for Marchesa’s return to New York Fashion Week after the two showed in London last season.

“It was nice just to go for our 10th anniversary back to London and show in front of our friends and family, but we’re happy to be back,” Chapman smiled.

But not for long as she hustles her way to Los Angeles for Sunday’s Academy Awards.

“Georgina’s leaving straight after the show to fly to LA, so it’s a little hectic,” Craig said.

Chapman laughed: “Straight to the airport.”